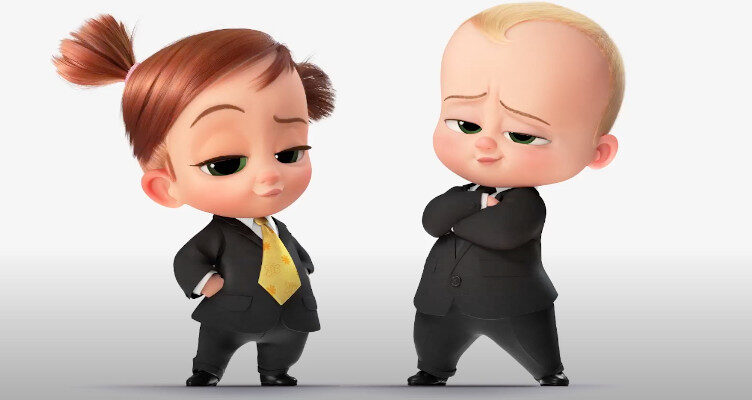 We can only imagine what happens in the babies world. Babies are the future of us and probably they will have to solve many of the present problems. In Baby Boss: Family Business, babies have a problem to solve and they need the help of two babies, now adults.

The trailer of Baby Boss 2 has been release. It is the sequel of Baby Boss, the DreamWoks movie of 2017 directed by Tom McGrath, inspired to the Marla Frazee novel and distributed by 20th Century Fox.

Baby Boss tells about the story of Tim Templeton, a little boy whose parents have a baby. The baby is a manager of a business, the BabyCorp, that is in trouble. The business is managed exclusively by babies and it has the object to monitor the love for babies in the world and keep it high. However, something is wrong with the love for babies and Baby Boss is sent from the business to invastigate. Tim has to help him and both of them start an adventurous and funny mission to save the business. At the end, the BabyCorp is safe and the little Boss decides to stay with the Templeton family.

In Baby Boss: Family Business, Tim and Ted are now adults. The BabyCorp is in trouble again and this time it’s Tim’s second child who asks the two brothers help to save it. Indeed she is a manager of the business and through a new baby formula turns Tim and Ted in two babies again. Together they have to defeat someone who is educating children to behave badly.

The movie has received a huge success and a series of 4 seasons, ispired to it, has been realized, Baby Boss: Back in Business avaiable on Netflix.

Here the link to the trailer:

We all know that nothig escalpes from fan’s attention that have noticed something in the first images of Baby Boss: Family Business.

This is something about the aspect of Tim’s children that changes between the first and the second movie. At the end of the first movie, we see Tim in the hospital for the birth of his second child, she moves and uncovers in the baby cot. The new born is a girl with blonde hair and blue eyes like his father.

Instead, in the second movie the little girl is different. She has brown hair and green eyes like his uncle Ted.

Even Tim’s first child in the new movie has a different aspect from the previous one. In the sequel, the little girl has skin and hair darker then in the first movie. Moreover, she has more decisive somatic features.

Baby Boss: Family Business will be released in march 2021. It is always directed by Tom McGrath and written by Michael McCullers. It’s also confirmed that Alec Balwin will reprise his role as Baby Boss voice.