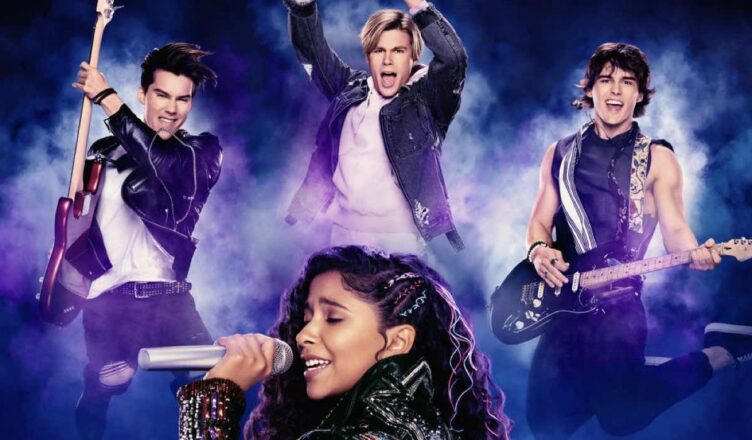 Julie and Phantoms could be considered as a Disney series, the colors, the songs, the atmosphere indeed remind strongly movies like High School Musical.

Instead, Julie and the Phantoms is a Netflix series, available in streaming on the platform since 10 September 2020. The reason why we could consider the series as produced by Disney is also the director of the series, that is, not other than Kenny Ortega, director and choreographer of movies like HSM and Descendants.

Julie and the phantoms is a series for kids but it has got a great success also among the adults. Both kids and adults have loved the series, in this article we are going to talk about it and its future.

JULIE AND THE PHANTOMS: THE SERIES

Julie and the Phantoms is a musical-comedy drama television series of 2020 produced by Netflix with nine episodes, created by Dan Cross and David Hoge, and directed and choreographed by Kenny Ortega. The series is inspired to another Brazilian series of Nicklodeon called Julie e Os Fantasmas, released in 2011.

JULIE AND THE PHANTOMS: THE PLOT

Julie and the Phantoms tells the story of Julie, a sixteen years old girl that, after her mother’s death, can’t sing or play anymore. The girl loves the music and her mum’s death risks to make her abandon her dreams. Three ghosts, Luke, Alex and Reggie, died in the 1995 and members of a band called Sunset Curve, will help her to not to abandon her passion. Not only, the three young ghosts will get in trouble and Julie will have to help them.

JULIE AND THE PHANTOMS: THE DIFFERENCES

As previously said, Julie and the Phantoms is based on another Brazilian series of the Network Nicklodeon called Julie e Os Fantasmas. Obviously, the Netflix series differs from the Brazilian one for some aspects. Let us briefly see which ones.

THE NAME OF THE CHARACTERS AND THE BAND

One of the differences between the two series is the names of the characters that, for understandable reasons, change from a version to the other.

First of all, the three ghosts in the original version are called Daniel Castellamari, Martin Novac and Félix Patter. In the new version, they are called Luke Patterson, Alex e Reggie, respectively played by Charlie Gillespie, Owen Patrick Joyner and Jeremy Shada. Luke is the only one about whom we know his surname, the surname of the other two boys is one the mysteries of the series.

The protagonist Julie, played by Madison Reyes, changes her surname from Diaz to Molina and her little brother changes his name from Pedro to Carlos. In some interviews, Kenny Ortega revealed that with the name of Luke and Carlos, he wanted to pay homage to the actor Cameron Boyce. The young actor, prematurely died in 2019, played two characters with those names in the movie Descendants and the series Jessie.

The protagonist’s best friend, her rival and the boy for whom she has a crush change their name from Biatriz, Thalita and Nicolas to Flynn, Carrie and Nick. They are played by Jadah Marie, Savannah Lee May and Sacha Carlson.

Moreover, Julie with the three ghost form a band that has the name of the series Julie and Phantoms (Tell your friends!). Meanwhile in the original version the band’s name is Os Insòlitos.

The reasons for the names changes will be clear for everyone and there is no need of an explanation, so let’s go on.

CHARACTERS WHO DO NOT APPEAR (FOR NOW)

Moreover, in the Netflix series there is a new character. Willie, played by BooBoo Stewart ( seen in Descendants and Twilight), is a skater that will be the love interest of Alex.

Like in all the stories, even in Julie and the Phantoms there is a villain. In the original version, he is called Demetrius, a ghost police officer who tries in every ways to divide Julie and the three-ghost boys; it seems that he was a singer when he was alive but not successful.

In the Netflix version, the villain is called Caleb and he is played by Cheyenne Jackson (Hades in Descendants 3). He is the owner of a ghost club in Los Angeles and, like his Brazilian counterpart, tries to divide Julie from the Luke, Alex and Reggie.

JULIE AND THE PHANTOMS: SOUNDTRACKS AND CHOREOGRAFIES

We have already said that, Julie and the Phantoms is a musical series and it is full of pop and rock songs. The soundtrack of the first season includes 15 songs whose genre go from rock to pop and also pay homage, through the choreographies, to the K-Pop. This is the case of the songs Wow and All Eyes On Me, sang by Savannah Lee May in her role of Carrie. She is Julie’s rival and the leader of the girl band Dirty Candy in the series, who performs in a choreography with costumes that remind strongly the girl bands of K-Pop.

Furthermore, one of the song of the soundtrack has been added almost by chance. It is the case of the song Perfect Harmony, interpreted by Madison Reyes and Charlie Gillespie, Julie and Luke in the series. The song indeed has been written from the two young actors almost for fun but Kenny Ortega appreciated the song so he decided to add it to the soundtrack and the series.

The two protagonists dance on the melody of the song with a choreography and an outfits that remind a lot (at least for me) the movie Dirty Dancing which was choreographed by Kenny Ortega in the 1987 (Go to watch it and tell us if Julie and Luke remind you Baby and Johnny).

So, Julie and the Phantoms is an explosion of colors, dances and music that bring who knows High School Musica back in time and brings who does not know the movie to get to know to the genre.

The series entertains, makes you laughing and also crying, indeed it is impossible to not crying with the song Unsaid Emily e its story, well told with soft but very emotional scenes (Go to watch even only the video of the song taken form the episode of the series and tell us if you have cried).

JULIE AND THE PHANTOMS: SECON SEASON AND ANTICIPATIONS

Julie and the Phantoms was released on Netflix in 10 September 2020, at the moment the second season has not been announced but the great success of the series makes the fans hope. Not only but the series ends with a cliffhanger and leave us with some unfinished businesses (Understood the reference?). One of those, regards the surname of Alex and Reggie, as we have preaviosly mentioned.

Indeed, through the episodes we get to know something of Luke’s past meanwhile that of the other two boys remains a mystery. Other mysteries regard the link between Julie’s mother and the three ghost boys, the link between them and Carrie’s father and more. We do not want to spoil anything, if you are curious open Netflix and watch the series.

Regarding the anticipations, there are not relevant anticipations now, just some information accidentally revealed form the actors of Julie, Luke and Alex.

Madison Reyes, Charlie Gillespie and Owen Patrick Joyner, like Tom Holland and Mark Ruffalo in the MCU, let out some information in some interviews that should have remained secret. These information regards for example Luke who probably has ADHD or autism, that he and Alex has been a couple in the past and that maybe the boys death has not been an accident.

Interesting details for who has watched the series and that probably should have been revealed in the next seasons. Kenny Ortega and the producers of the series did not appreciate the revelations.

To conclude, Julie and the Phantoms is a series created for kids but able to be appreciated by everyone for its lightness and depth. Nine episodes to enjoy.

One thought on “JULIE AND THE PHANTOMS: The Netflix series by Kenny Ortega”