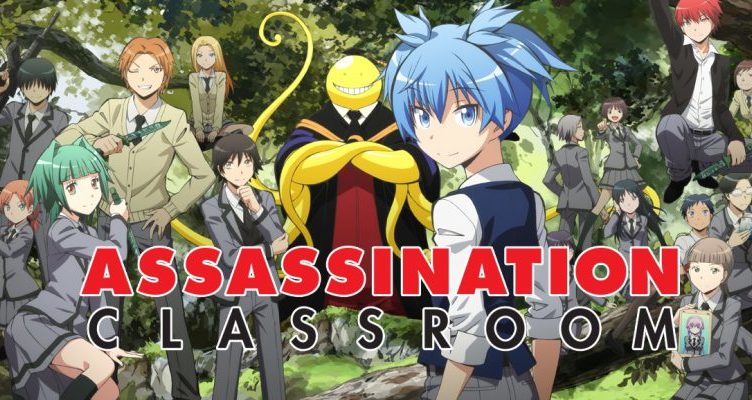 Karma: Could you solve a doubt? If you are called Korosensei it’s because you’re a teacher, right?

Karma: And a teacher should protect his students with his life, right?

Korosensei: Sure. Otherwise what kind of teacher would he be?

Today being a teacher is not easy; it is continously said on television, the relationship between teacher and students has changed, there is no respect for the teacher anymore and who is the culprit, is unknown.

Anyway, being a teacher is a respectful job, which consist in instructing young minds and requires particular skills, commitment and sense of responsibility. Korosensei, central character of the famous Japanese anime/manga Assassination Classroom created by Yusei Matsui, well knows that.

Assassination Classroom: a quick look at the story

Korosensei is a teacher with the aspect of a yellow octopus who, after to have destroyed the 70% of the moon, plans to do the same to the earth, establishing an ultimatum and the condition that meanwhile he could be the teacher of the E class of the middle school Kunogigaoka.

The class, nicknamed “End”, includes the students who, discriminated, can’t fulfil the high standards of the school. The Government gave them the task to analyse and find a way to kill the creature, fast and apparently indestructible, before he can destroy the world.

The manga composed by 21 volumes and transposed into an anime of 2 seasons, over the central theme of the story, which is the assassination, allows reflecting about some other topics such as the role of the teacher and his relationship with the students. Moreover, it allows talking about the topic of rhetoric and dialectic of the classic philosophy.

KOROSENSEI THE GOOD TEACHER OF QUINTILIAN

Korosensei is a creature with a particular personality, with the aspect of a yellow octopus 3 metres high and incredible powers. Joyful and irreverent, he shows to be, other than a target, above all a good teacher, careful with his students, for who he would sacrifice himself, giving them in a unique way strong lessons both for school and everyday life.

Gradually, the tentacled teacher is able to get the trust of his students who start to look at him, less as an assassination target and more as a landmark. 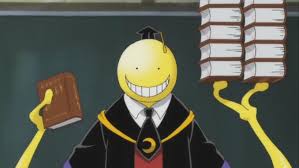 Korosensei is, from a certain point of view, the representation of the ideal teacher of Quintilian,  ancient literary man born in Spain in the 35 d.C and lived in Rome who was a teacher himself for all his life.

For him, the ideal teacher was that driven by optimism in the performance valuation, careful about the capacities of his students and about their reactions towards the subject taught, able to dose the notions and to accord moments of relax and recreation, without any constrictions. For Quintilian, the good teacher was characterised by technical expertise and above all moral qualities.

Korosensei with his slippery tentacles, his round head, his toga and his bonnet, have all of these qualities. He is careful about the needs of his students, strongly optimist about their potentiality and their future, always ready to help them, even with contemporary and personalized lessons, made at speed Mach 20 to increase their ability in the subjects more difficult for them and to encourage them to follow their passions and attitudes.

Korosensei shows to be, towards the students of the E class, derided and discriminated, for have been included in what would be the worst class of the institute, necessary to maintain a certain equilibrium in the school according to the questionable vision of the principal, more human and comprehensive than any other person. In this way, he gets their trust, their respect and their esteem in a reciprocity relationship, as well as the relation between teacher and students should be for Quintilian. 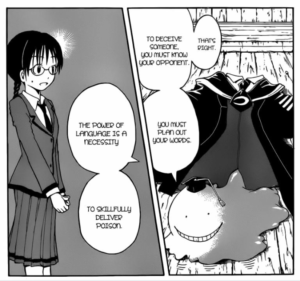 Korosensei represents the ideas of Quintilian even as regards for the rhetoric. Rhetoric is defined as the art or technique to speak or write in a persuasive way, which is for the Latin literary man an important skill for the teacher and in general for every cultured man.

For Korosensei, who shows to have this skill, being able to communicate in an effective way is an important skill for every professional assassin and in general for every person. An advice given to his student Okuda, excellent in chemistry and mathematics but not so good at Japanese (our English to understand), shows that.

The student, wanting to poison the teacher but unable to express properly, try her attempt in an “honest” way, directly offering the poison to the teacher who kindly accept it. The tentacled creature tricks his student twice, the first one pretending to have been poisoned from the venom and the second one when he offers himself to help her to create an effective venom for him, realizing instead an enhancer substance of his abilities.

“To deceive someone, you must know your opponent. You must plan out your words. The power of language is a necessity to skilfully deliver poison”

This is what the teacher said to her, giving her two different advices: to achieve our own goals is necessary to well-know our interlocutor and express ourselves in an effective way. This is true for an assassination or even for winning a debate.

The episode above described allows doing another reasoning. The fact that Korosensei has made his student to feel directly what to be deceived means giving her a lesson, allows to claim that he not only represents the ideal teacher of Quintilian but also the ideal teacher of Socrates.

The ancient Greek philosopher claims that the task of a teacher is not to broadcast the knowledge because it is just inside the students who have only to remember it.  To take out the knowledge from the inside of the students, Socrates elaborates the maieutic art, from the Greek “the art of the midwife”, described by Plato in the Teeteto, which consist in the dialogue.

Through the dialogue, for Socrates, the teacher can take out from the students their knowledge, with a continuous question and answer it is possible to break the wrong conceptions and bring out instead the correct notions, without imposing anything as well as happens for the Greek philosopher with the rhetoric and persuasion.

Korosensei employs this technique with his students. In a continuous dialogue with them, he does not avoid that they commit mistakes or say wrong things, but helps them to understand, error after error, attempt after attempt, what is right and what not, how they can correct their mistakes, exactly as Socrates did.

Therefore, in the light of what has been said Korosensei is both an orator and a maieutic master. Like this, many other analysis and reasoning can be done, as much as the tentacles of Korosensei, but for now this is the conclusion. If you liked the article, leave a comment and share it but above all stay tuned for other interesting articles. 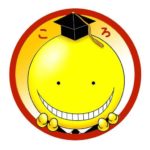 To the next lesson! Hihihihi

One thought on “#PHILOSOPHICALPILLS: Korosensei and the Assassination Classroom between rethoric and dialectic”