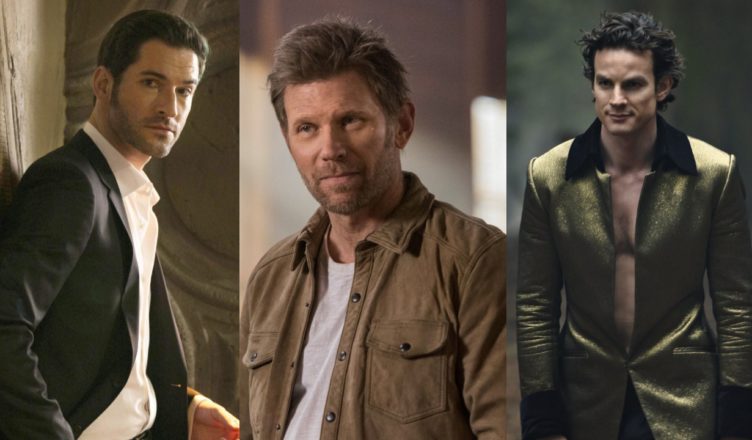 After a long waiting and a hard battle to save it, the first part of the 5th season of Lucifer has finally arrived on Netflix. It has arrived immediately at the first place in the Top 10 of the best series.

In this new season, we find our devil right where we have left him, on the throne of the hell. Meanwhile his brother Amenadiel, his beloved Detective Chloe Decker, his friends Linda with the little nephilim Charlie, Dan, Trixie, Ella and the demon Maze continue their lives on earth.

In the years, Lucifer has appeared in movies, tv shows, books, comics and manga. We have seen him played by Mark Pellegrino in Supernatural, played by Luke Cook in The chilling adventures of Sabrina and obviously played by Tom Ellis in Lucifer, the Netflix series based on the Dc comic. He has also appeared in mangas like Blue exorcist, Comet Lucifer e A deal with Lucifer

But who is really Lucifer?

Everyone knows, has read somewhere or has learned at catechism that Lucifer was an angel of the Lord who rebelled against God and for this, he was punished and kicked out of the Heaven. He became the Devil, symbol of sin, seducer and tempter. He caused the expulsion of Adam and Eve from Eden. True but too simple. Lucifer is more than this, defining who he is is more complicated than it seems. Indeed, his origins derived from greek and roman mythology, Judaic literature and biblical stories. This makes him a complicated character with many representations and symbolical meanings.

Simplifying, in the tradition Lucifer is a celestial creature created by God. He is a Seraphim, belonging to the first hierarchy of the angels of the Lord including Cherubs and Thrones. Lucifer is described as the most glorious, beautiful and shining angel, the closer to god.

In the various stories and myths, he is called in many different ways as Satan, prince of darkness, ancient snake, devil, Belzeebub. In the Netflix series, Lucifer is also called Samael. Samael is the name of an archangel of the Hebraic religion who has the role of destructor, seducer and accuser. Lucifer is often associated to Samael, so he is considered as an archangel like Michael, Raphael and Gabriel.

In the Netflix series, it is often metioned the fallen angel’s rebellion. As we’ve preaviously said, everyone knows tha Lucifer rebelled agaist God, was defeated by Michael and hurled in the Hell. However, few people knows exatly why he rebelled.

Talking about the reason of Lucifer’s rebellion is as complicated as talking about his origins. There are many different interpretation of the reason that took the most favorite angel of the Lord to rebel. We can summarize three.

The first reason is that Lucifer rebelled against God because he wanted to rise above God or at least equate to him, sinning in this way for pride.

The second reason is that Lucifer was jealous of the men, he didn’t accept that superior creatures like the angels could love something inferior like the men, so he rebelled.

The third reason is what equate Lucifer to Prometheus. According to this interpretation, Lucifer wanted to donate to the men the knowledge in order to take them out of the ignorance where God wanted to keep them. So Lucifer didn’t take Adam and Eve to sin but he gave them knowledge and awareness, their free will. Like Prometheus was punished and hurled in the Caucasus, in the same way Lucifer was kicked out from Heaven and hurled in the Hell.

As we’ve previously said, Lucifer is a complicated character with many representations and symbolical meanings. He is mainly associated to sin, corruption, seduction and destruction, in a word the evil. Some stories tells that, after the fall, Lucifer has turned into a monstrous creature. Some of them describes him as a creature with horns and bat wings. Others describe him as a creature half man and half goat. In any case, his transformation is the symbol of the corruption of his angelic nature. In The chilling adventures of Sabrina, Lucifer initially appears like an anthropomorphic creature with the face, the horns and the plinths of a goat. It is also shown how he has slowly turned into it after the fall from the Heaven.

Why Lucifer is associated with goat? In the Netflix series, Lucifer doesn’t appreciate this association between him and the goats. In an episode of the first season, he stops a false satanic rituals where he was represented like the goat creature.

The fallen angel is associated with goats form the Middle ages. The origin of this association is linked to a ritual of purification, mentioned in the Bible, where a goats was sacrificed to the demons, thrown from a cliff to bring away all the sins of Israel.

Therefore, according to the traditional conception, Lucifer is the symbol of evil. The goat is one of his symbols like the star with the inverted tip. Both the symbols are visible on Lucifer’s coin in the first season of the show with Tom Ellis. However, this is not the only symbolic meaning of the fallen angel, as we have said from a gnostic point of view Lucifer is a savior, he frees the humanity from the ignorance and God’s tyrannical influence. He is literally the bearer of light.

We have arrived to the central point of the article, the Lucifer effect. In the devilish Netflix series, Lucifer has a particular effect over the people, what he called “his magic”. Indeed, he is able to induce everyone to tell him their deepest and hidden desires. No one can resist his question “What is it you truly desire?” and his magnetical eyes.

In American Horror Story, it is said “the devil doesn’t come dressed in a red cape and pointy horns but he comes as everything you ever wished”.

Then why Lucifer is always considered the responsible of the people evil actions? The answer to this question derives from the conception of the man double nature. According to this conception, two halves compose man: one good and one evil like in L. Stevenson Dr.Jekyll e Mr.Hide. The evil side of the man is considered as a creation of the devil. When he made Adam and Eve sin, he condemned the humanity forever. So every evil actions done by someone is the devil’s responsibility, the people do not have any responsibility. In this way, everyone can be evil, even the kindest person because everyone has an evil side created by the devil.

So, it is so simple? It is just the Devil to make people bad? Or there is something else? Some psychological or social explanation? The evil is really inside people or something or someone makes them evil?

The Stanford prison experiment is a psychological experiment organized by the American psychologist Philip Zimbardo in 1971 to study the human behavior in a society, a group, and answer to the question “What makes people evil?”.

A group of 24 volunteers were divided in 12 guards and 12 prisoners and locked in a simulated prison, built under the Psychology department of the Stanford University. The prisoners had a chain and a identifying number. The guards instead had a suit, a truncheon, a pair of handcuffs and a whistle. The prisoners had to respect the established rules and the guards had to make the prisoners to do it.

The experiment was supposed to last 14 days but after just 2 days the 24 people identified so much themselves with their role to wreak havoc. The guards started to abuse of thei power. They became sadic and violent. They made the prisoners to do indescribable things. On the other end, the prisoners initially started to rebel. Then, after 5 days, they assumed a passive and disconnected behavior. He was so tortured to forget to be just guys. The experiment was interrupted after just 6 days.

Zimbardo named this the Lucifer Effect. About the reasons of the people behavior, in particular of the guards behaviour, the american psychologist theorised that the anonimity, the diffuse responsability and the grupo size caused a process of identity and self-awareness loss. In other words, the participants lost their singular and personal identity, assuming that of a member of the group, anonymous and loyal. In this way, what the prisoners suffered was the group responsibility, not their own.

The experiment has shown how the evil is not something inside the human nature but derives from social, environmental, psychological, situational factors, how the border between evil and good is thin, and how a person can be evil if he or she has the possibility. Above all it has shown how complicated and fragile is the human being.

The experiment was repeated and followed by other ones. The Montenegrin artist Marina Abramovic repeated the experiment in the 1974. She would be motionless for 6 hours while the public could everything they want to her. They had 72 objects like chains, blades and a gun with only a shot at disposition. After an initial esitation, people started to move, they hurted her, cut her, toeched her. the public divided between those who wanted to torture her and those who wanted to protect her. They were almost  about to use the gun but the experiment ended before they could. At the end, the public run away to avoid the confrontation with the artist and she said that if they could they would killed her.

We have started to talk about Lucifer and we have arrived to talk about the Lucifer Effect. As we have said, considering the Devils as the only responsible for the evil of the world and people is as semplicist as wrong. The evil can come from everywhere and everyone, even the best person can be evil if he or she is in the right psychological, environmental and social conditions.

Anyway, talking about our devilish and angelic Lucifer played by Tom Hellis, the second parte of the 5th season do not have a date release yet, maybe between the end of 2020 and the beginning of 2021. The pandemic has caused some problems but the showrunners of the show has assured that everything is programmed, the road to follow is tracked. We only have to be patient.