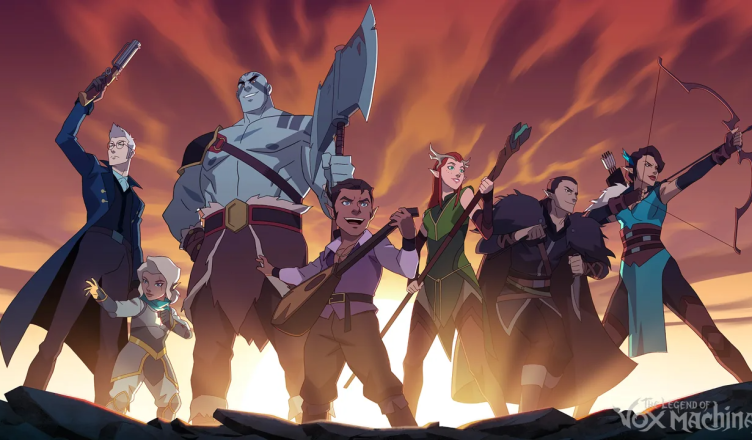 All respectable nerds are familiar with Dungeons & Dragons, the famous role-playing game created by Gary Gygax and Dave Arneson, which has now become a franchise that has touched various environments, from literature, to video games and to the audiovisual world. The animated series The Legend of Vox Machina was born in this latter sector.

Vox Machina, the genesis of the project

The series, conceived by voice actor Matthew Mercer and directed by Sung Jin Ahn, landed on Prime Video on January 28th. It represents the animated adaptation of the first campaign of Critical Role, a historic group of role players made up of American voice actors, led by Mercer himself as the dungeon master.

Born as a simple pastime between friends, their adventure was brought on Twitch by Felicia Day via her Geek and Sundry channel. The enormous success it achieved then prompted Mercer to launch a kickstarter campaign on March 4, 2019 to finance the making of an animated series.

The fundraising goal was not high: only $ 750,000. But after 24 hours from the launch the donation counter showed 4,332,066 dollars and when the Kickstarter ended and the amount raised had exceeded 11 million dollars. The donations obtained have thus guaranteed the full development of the series and broadcast on Amazon Prime Video.

The Legend of Vox Machina

The Legend of Vox Machina, as well as the original D&D campaign, is set in the world of Exandria, in particular in the continent of Tal’Dorei, designed by Mercer and later also become a setting manual for D&D. The series revisits a narrative arc from the first Critical Role campaign: the liberation of the city of Whitestone.

However, the first episodes are dedicated to the presentation of the Vox Machina group, formed by the barbarian goliath Grog Strongjaw (Travis Willingham), the half-elf druid Keyleth (Marisha Ray), the gnome bard Scanlan Shorthalt (Sam Riegel), the gnome cleric Pike Trickfoot (Ashley Johnson), the half-elf rogue Vax’ildan “Vax” Vessar (Liam O’Brien), the half-elf ranger Vex’ahlia “Vex” Vessar and the human gunslinger Percival “Percy” Fredrickstein Von Musel Klossowski de Rolo III (Taliesin Jaffe). The latter has such a long name because of noble origins and he will be at the center of the events of the first season as Whitestone represents his hometown.

paraphrasing Admiral Arrow’s words from the movie Treasure Planet, the Vox Machina are not real heroes, they are a deranged handful of various scoundrels. In fact, they are presented to us in the best possible way: with a fight in a tavern (no better way to start a D&D adventure), From which they are kicked out, finding themselves without a penny in their pocket.

After reading an announcement on a bulletin board, they end up being hired by the ruler of Emon to defeat a mysterious beast. From here, cutting through many parts of the original campaign, the plot accelerates, immediately showing the antagonists of the first season, Lady Delilah and Lord Sylas Briarwood, the current governors of Whitestone.

Overall, the plot is linear and agile, thus remaining faithful to the material from which it takes inspiration. This, however, does not in any way restrict characterization of the characters. Although often shallow, they manage to bring out their personality immediately.

Vox Machina and the stereotypes of D&D

The legend of Vox Machina is a choral story, without a protagonist who stands out. Having a group of seven characters as the center of the narrative is not easy, but the series succeeds thanks to its stereotypical characters, which is very common in Dungeons & Dragons. Scanlan for example is the classic egomaniac bard with an unbridled passion for women, Grog is the naive barbarian who breaks everything, while Vex is the strong and daring woman.

In its 12 episodes the series also tries to propose a certain evolution of the characters. For example, Keyleth is the first to have a hint of character development. For much of the season, the druid tries to overcome her insecurities. We also see Pike making an “introspective journey” to regain faith and Percival who, as a careful calculator, is instead consumed by revenge against the Briarwoods, who killed his family.

The secondary characters that surround the adventures of Vox Machina are instead simple but able to stand out. Nothing special or exciting, but honest shoulders for our protagonists.

A series without filters

The legend of Vox Machina is clearly a product intended for an adult audience. However, the huge amount of swear words and bloodshed present should not be seen as a weakness. The tone of the series is in fact in the same vein as another Amazon animated series, namely Invincible. A light and easygoing tone, accompanied by moments of serious reflection.

How can you not love such a product? The legend of Vox Machina is a wonderful adventure between friends, perfectly reproduced on the screen. An artfully crafted work based on Dungeons & Dragons. All fans of fantasy and RPG will surely be captivated by this first season.

The series is also suitable for those unfamiliar with the world of D&D. In fact, it does not bother to explain the world in which it is set, but at the same time it does not require any previous knowledge.

Thanks to a masterful narration and a lively and engaging fantasy setting, the series manages to convey all the necessary information, without treating the viewer like a child who has to be explained every single detail. To appreciate it, just let yourself be carried into the world of Matthew Mercer and rely on his narration, as many have been doing for years with Critical Role.

What are you waiting for? Check it out on Prime Video if you haven’t done so yet!