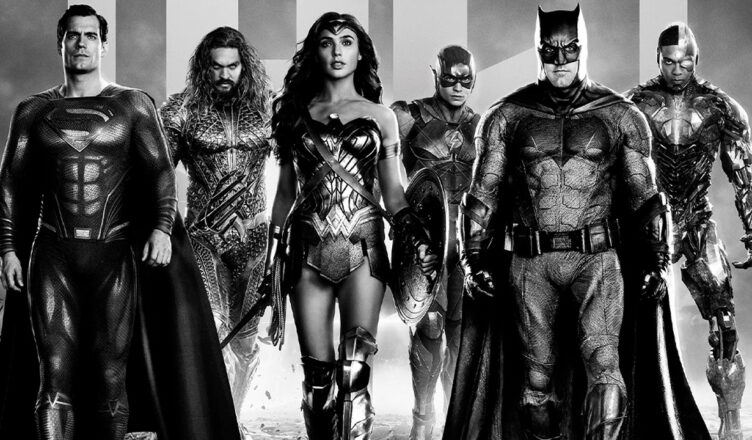 Yesterday I took an entire afternoon to see the four hours of Zack Snyder’s Justice League, the long-awaited superhero-themed blockbuster that finally shows us the original vision of its director. Four hours well spent.

Zack Snyder’s film has nothing to do with the messy movie released in 2017. The only thing in common is the structure of the film: death of Superman, Batman seeks allies, first confrontation with the enemy, resurrection of the Kryptonian, final confrontation. However, Snyder’s version, the original one, far from the modifications made by Joss Whedon’s team, is more profound, epic, spectacular, a 100% Snyderian film.

In summary, we have already seen what happens in a generic way. How it happens, however, is something new.

The film is divided into a prologue, six chapters and an epilogue. The result is a 4 hour blockbuster. Despite the monstrous duration, the film maintains an ever-pressing pace, where the images and the visual aspect act as a narrative engine. Snyder is in love with the IMAX format, so the aspect ratio of the film is 4:3. An artistic choice that, accompanied by the original photography and colorimetry by Fabian Wagner, gives the film a depth and a pictorialism that has no equal. The new visual effects created by Weta then complete the picture and in a few moments you forget that you have two black bars on the sides of the screen.

Snyder’s direction involves the viewer from the beginning to the end of the film. Zack Snyder’s Justice League features all the director’s trademarks, with insane slow motion, gory scenes at the right point and moments of absolute pathos. We arrive at the end credits touched and happy.

Zack Snyder therefore redeems himself, proving that he is not a bad director, but a concentrate of creativity, a father of stories and a lover of the Seventh Art.

The first major change brought about by the film is the narration of the protagonists, no longer flat silhouettes but well-rounded characters. The six heroes of the Justice League finally have a background to tell, they are driven to act by certain motivations, they have their own path to take within the film.

The first two hours of the film are dedicated to them, to explain who they are and why they act, to create a link between spectator and protagonists. This bond will give the second half of the film a greater emotional connection.

In particular, the characters of Flash (Ezra Miller) and Cyborg (Ray Fisher), who in Whedon’s version were only extras, are more detailed. The most spectacular scenes in the film are dedicated to the Justice League’s speedster and his naive and clumsy behavior is well contextualized. Cyborg, on the other hand, is the real beating heart of the film. His story and the difficult relationship with his father represent in fact the main vehicle of emotions of the film.

Aquaman also undergoes a change. In Whedon’s film, he was just an unsociable but very charismatic braggart. In the Snyder Cut he instead becomes a god to worship. For example, the sequence in which he greets Bruce Wayne and dives into the sea is accompanied by songs and prayers in his honor, which build a totally different and more poetic atmosphere.

Lois Lane is no longer an extra. In the movie she is the protagonist of several scenes, which finally show us the her pain for the loss of Superman, a detail totally absent in Whedon’s Justice League. For the Kryptonian, I only have one thing to say: the black suit rocks

Real villains for the Justice League

Steppenwolf’s new look gives the villain a new life. In addition to the aesthetic re-design of the character, the villain is the protagonist of some important sequences that characterize him properly. Finally we perceive its nature, its feelings, its thoughts, its cruelty and its true goals.

The biggest surprise is the appearance of Darkseid, one of the main DC Comics villains. His presence and intentions reveal an important subplot that completes the film and leaves the door open to an unlikely but spectacular sequel. Snyder’s original project was in fact a trilogy, centered on the clash between the Justice League and the tyrant of Apokolips.

If snyder’s version was released in 2017, Darkseid would be as memorable as Thanos by now.

Zack Snyder’s Justice League does not disappoint expectations. The title of the film underlines how the director’s voice is essential and pure. Despite the duration, the film is never boring and builds an exciting story, with well-defined characters and a mythology that is expressed through a refined cinematic language. Epic, spectacular, fun, majestic, Snyder’s movie is all of this and more. My only regret is the epilogue, which leaves me with a bad taste in my mouth. It introduces a famous “Martian” and makes us long for a sequel that we will never see. Like all Snyder fans, I wish his show would never end.