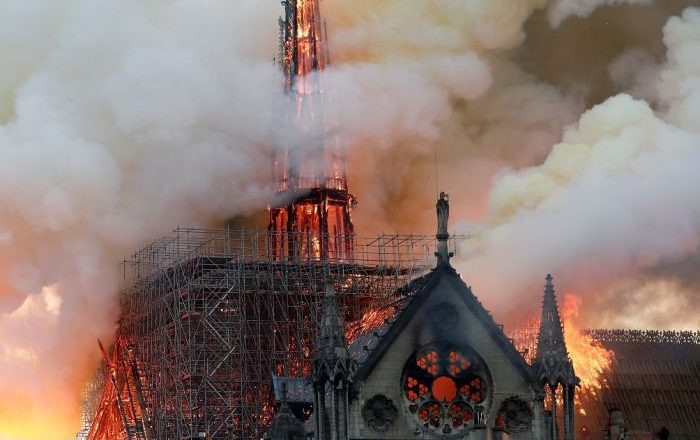 The news about the fire burst at Notre Dame yesterday has made everybody anxious, France and the entire world. There was a lot of fear to lose one of the most beautiful and visited place of the world with over 600 years of history on its shoulder. Now that the worst is gone, we count the damages that are not only physical but above all emotional. Watching one of the UNESCO’s asset, one of the most visited museum and church burning and crumbling has affected millions of people who have shown their solidarity on social media. But what has really happened? Let’s see together.

The dynamic of the event is still unclear and unverified but what is certain is that on Monday 15 April 2019 around 18.30, during a mass celebration, a fire would have burst. It fastly would have reached the roof and the spire of the historical cathedral, causing their collapse under the shocked eyes of Paris and the whole world. The operation of the fire fighters has been fast, they have worked hardly until 2 pm when the fire finally has been partially controlled, except for some active outbreak. The fire’s causes are uncertain but it seems to be related to the recent renovations that has interested the church in the last few days.

THE PROFECY OF VICTOR HUGO

The mental association of the event happened at Notre Dame with the events narrated in the famous book of the French writer Victor Hugo is almost unwanted. Everybody, for at least one second, seeing the dramatic images of the fire which was breaking the church, has thought about Hugo’s story The Hunchback of Notre Dame, base of the Disney’s adaptation. So re-opening the old book, we can find surprising description of the author about the fire that would have burst in the church.

“All eyes were raised to the top of the church. They beheld there an extraordinary sight. On the crest of the highest gallery, higher than the central rose window, there was a great flame rising between the two towers with whirlwinds of sparks, a vast, disordered, and furious flame, a tongue of which was borne into the smoke by the wind, from time to time. Below that fire, below the gloomy balustrade with its trefoils showing darkly against its glare, two spouts with monster throats were vomiting forth unceasingly that burning rain, whose silvery stream stood out against the shadows of the lower façade.

As they approached the earth, these two jets of liquid lead spread out in sheaves, like water springing from the thousand holes of a watering-pot. Above the flame, the enormous towers, two sides of each of which were visible in sharp outline, the one wholly black, the other wholly red, seemed still more vast with all the immensity of the shadow which they cast even to the sky.

Their innumerable sculptures of demons and dragons assumed a lugubrious aspect. The restless light of the flame made them move to the eye. There were griffins which had the air of laughing, gargoyles which one fancied one heard yelping, salamanders which puffed at the fire, tarasques which sneezed in the smoke. And among the monsters thus roused from their sleep of stone by this flame, by this noise, there was one who walked about, and who was seen, from time to time, to pass across the glowing face of the pile, like a bat in front of a candle.

Without doubt, this strange beacon light would awaken far away, the woodcutter of the hills of Bicêtre, terrified to behold the gigantic shadow of the towers of Notre-Dame quivering over his heaths.”

The book was written in the 1831 and through it the French author would have wanted to report the state of degradation of the cathedral at that time and the necessity of its restoration. As a warning he wrote: “Time is blind and the man is fool” and added “If we had the pleasure to examine each track of the destruction impressed over the ancient church, that caused by the time would be the smallest part, the worst would be caused by men”

THE BELLS OF NOTRE DAME

Another story turns aroud the fire burst in the parisian cathedral, related to the statues that are in it. On Thursday 11 april 2019, 16 statues showing Jesus, the apostles and the evangelist symbols has been took away from the church to be repaired. To simplify the operation, the statues, 3 metres tall, has been decapitated and transported at over 100 mitres high, a spectacular operation happened under the eyes and over the head of many parisians and turists. They would have come home in the 2021. The operation would have saved the statues from the fire burst in the cathedral but it would have been interpreted as a bad omen. Indeed according to a tradition, they looked over the church and the city.

Notre dame was founded by the theologian Maurice de Sully, become bishop in 1160. The construction of the Cathedral, started in 1163, took over 200 years, during which it was restored and modified many times until becoming what we are used to see today. The fire has broken the church causing many damages, the structure is safe but it needs to be completely restored to guarantee its stability. French President Macron thanked everybody who helped to save the church and he has opened an international fundraiser to fix it. “We will rebuild it together” he said because it’s what our history deserves.