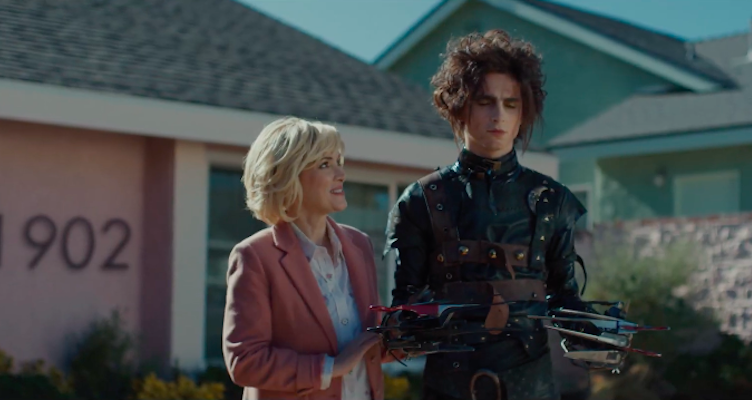 The Super Bowl is one of the most awaited event of the year. It is the championship of the National Football League. Some follow the event because passionate of the sport but some others follow it for the commercials and the trailers that every year are broadcasted during the event.

Businesses invest huge amount of money to get a space in the Super Bowl and to realize unique and particular commercials. Usually during the event, trailers of the new upcoming movies, and tv series, are shared.

In this article, you can find a list of the best commercials broadcasted during the 55th edition of the Super Bowl. The sport event took place in Tampa, Florida, in 7 February 2021 where Tampa Bay Buccaneers and Kansas City Chiefs played.

Here instead is the link to the article with the list of the best trailers broadcasted during the Super Bowl 2021.

Timothée Chalamet becomes the son of Edward Scissorhands in the new commercials of Cadillac with Winona Ryder in her old role in the movie.

Amazon wonders what would be the perfect body for its AI Alexa: that of Michael B. Jordan. The actor will be the protagonist of the movie Without Remorse which will be avaiable on Prime Video.

Ashton Kutcher e Mila Kunis fight for the last box of chips in the new commercial of Cheetos.

Matthew McConaughey is in 2D in the new commercials of Doritos 3D chips.

Bryce Dallas Howard directs the commercial of Inspirational4 with the voice of Octavia Spencer, the initiative of Elon Musk about a future journey to the moon.

This year the beer producer has decided to not promote its product but to invest its money to raise awareness about Covid Vaccine.

Mike Myers and Dana Carvey riprese their roles of the 1992 movie Wayne’s World. With them there is also the rapper Cardi B to invite people to use the Uber delivery service.

Procter & Gamble with its new commercial and the slogan Come Clean to close the chore gap invites everyone to help cleaning the house, usually a only women task.

While everyone is wondering if the Tampa Bucaneeers quarterback Tom Brady is really the GOAT (Greatest Player of All Time), the famous irish beer deploys on field the football legend Joe Montana to say that the best footballer and the best beer is those are yet to come.

Can a burrito change the world? The Fast Food Restaurant Chipotle answer to that question with a beautiful commercial where shows that even the mexican burrito can change the world for a better future, throught a more sustainable production chain.