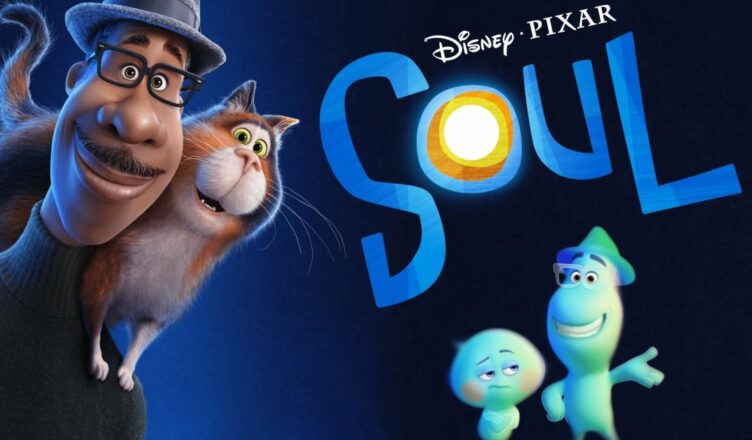 Disney gives a present for Christmas to its fans, making available on its platform Disney+ on December 25th the new Pixar movie Soul. The new animated movie by Mikey Mouse has been really appreciated from both public and critics. It has shown to be a deep and psychological story of hope and awareness.

In this article, we’re going to talk about the movie Soul which induces to think about the meaning of life and about our selves. Attention spoilers ahead! If you have not watched the movie, do not keep reading!

THE REAL PURPOSE OF LIFE IS LIVING

Joe Gardner is a man in his forty, a music teacher who has always tried to reach his dream to play in a Jazz Band. Unfortunately, he dies for an accident the same day of his first desired performance and finds himself in the “after-world”.

He does not want to move on so he escapes. He ends up in the “before-world”, the world of the souls not born yet. here he is assigned as a mentor to the soul number 22.

22 is one of the first soul ever created, she has had hundreds of mentors before Joe. None of them has been able to help her to find her “spark”, that is the thing that makes us live. She will find her “spark” by chance. For an accident, she enters in Joe’s body meanwhile the teacher enters in a cat’s one.

Living Joe’s life for a while, 22 tries the little things of life such as eating a slice of pizza, talking with people, listening to the music of a musician, enjoying the beauty of the sun through the trees and the leaves moved by the wind. In this way, she gets her badge for earth because she is now ready.

In their adventure, both 22 and Joe learns something about themselves. 22 learns to get over her prejudices and fears. The little soul, despite she had never lived before, considered the earth as an awful place full of terrible and meaningless things. Actually 22 was afraid to not be enough for living and that she would have never found her “spark”. Joe instead learns that he was so concentrated to reach his dream that he was not really and fully living.

The message here for both of them and for the public is that the real purpose of life is living, it’s enjoying the little and simple things like eating a good pizza, listening to a good music, feeling the sea’s water wetting our feet, admiring the sun shining in the sky, doing what we love because we love it.

There is no a unique purpose to find and to follow for the entire life. Jerry, one of the beings in charge of the “before-world” tell this to Joe when he asks to know what is 22’s purpose. The quantic being answers that it has never been a purpose.

The only reason to live, the Japanese concept of Ikigai, is living fully every single moment.

A SATYSFIED NEED CREATES A NEW ONE

The philosopher Schopenhauer claimed that man’s life is based on satisfying some needs, some lacks that if they remains unsatisfied make him suffers.

Joe Gardner of Soul seems to give reason to this kind of vision. He follows his dream, his need, for all his life without never realizing and satisfying it. This makes him suffer until he can reach his purpose, playing in the jazz Band of a great musician. However, after the coveted performance, the music teacher realizes that it was not like he had dreamed of. He feels empty and lost.

So, what is after satisfying the need? After reaching the final purpose? Schopenhaues would have answered that there is another need to satisfy, another purpose to reach. Then what is the sense of living just to reach one purpose without living fully?

Seneca claimed in the Brevitate Vitae that life is short because we waste it making wrong decisions. Life can stop every moment for any reason.

Joe in Soul walks while talking to the phone without paying attention around himself. He could die under an avalanche of bricks or hit by a car. Instead, he dies falling in a manhole.

A simple and banal cause of death due to a wrong decision, that of not paying attention to what is around him, to be blind and deaf towards life.

In his adventure in Soul, Joe meets a group of souls named Mystic without borders. They help the lost souls to find the right paths again. They are three souls of three people alive who through meditation enter the dimension between the real and the spiritual one. It is the dimension where we enter when we let our passion like drawing or singing, our work or our current activity overwhelms us.

Among the soul of who are singing, playing an instrument or playing at basketball, there are souls with a monstrous and suffering aspect.

Moonwind, the leader of this group of mystic soul volunteers, explains that they are the souls of all those people who can’t free themselves from their anxieties and obsessions, losing contact with life. We have the example of the soul of a financial consultant who was so into his work and his duties that he was wasting his life.

The group of Mystic without borders help the soul of this businessman to reunite with his body. The man stands up from his chair and screaming that is alive starts to throw away all of his things from his desk. Everything under the surprised gaze of his colleagues.

This scene is meaningful because it shows how the society with its hectic and incessant rhythms creates lost and suffering souls. Unhappy people who forgot their “spark” and the real sense of life.

The psychologist Freud sustained that the reason of the man’s misery is that he exchange part of his possibilities to be happy for the, even if minimal, security gave by the social order. In other worlds, the society forces the man to make a decision, sacrifying his “spark” to have a little bit of stability in life that does not correspond to have a happy and quite life.

Moreover, those lost, dark and suffering souls are also of those people who let that anxieties and fears turning into obsessions like to be thin, to have a determined object, to reach a determined number of likes.

WE CREATES OUR OWN DEMONS

At some point in the movie Soul, 22 becomes one of those lost souls with a monstrous and suffering aspect introduced by the Mystics without borders’s group. The little soul let her fears overwhelm her, turning her into a shadow of dust and pain. Joe follows her and when he reaches her, 22 captures him.

Joe is inside 22 and finds her crying. She is surrounded by some faces that are saying things like “you’re dishonest, all you make are bad decisions, you are un wise and you won’t make it in the world”, “You’re selfish, no one would ever want to be around you”, “you are the least remarkable soul I’ve ever met” and “you’ll never find your spark”.

They are the faces of all her old mentors who are talking with her own voice and among them, there is also Joe. This a psychological impactful scene.

Freud in his theory of psychoanalysis sustained that human mind is divided in three levels with a crescent deepness. These are the Ego, Unconscious and Subconscious. The Ego corresponds to the conscience, or better to the conscious part of man’s mind which the Austrian psychologist described as a battlefield where powerful forces fight each other.

The writer Svevo in his novel A Life describes the conscience as a labyrinth of intertwined dreams, desires, hopes and darkness.

Everything to say that what we see in this scene is 22’s conscience where her conscious and unconscious forces are fighting. It’s meaningful that these forces have the faces of her mentors and her voice, in particular Joe appears telling her “those aren’t purposes, you idiot. That’s just regular old living, this is a waste of time. You only got the badge because you were in my body that’s why you ruin everything because you have no purpose”. Joe’s words refers to what has happened on earth when 22 was in the teacher’s body. Through him, she has found her will to live, she has understand that she could be simply good at walking or watching the sky.

Here 22 has realized something that Joe hadn’t realized yet but she has let her fears question it. Not only but in her mind, 22 has twisted her mentor’s words Indeed, despite the musician was concentrated only in reaching his purpose, he has never told her that she was an idiot or a waste of time.

At this point, we can suppose that 22 has also twisted her other mentors words until to turn them into obsessions like “I’m not good enough”, “I got no purpose”, “I just need to fill out that last box”. Obsessions that have took her to lose contact with the reality.

So, 22 has created her own demons, like often happens to people without even realizing it, unconsciously.

In Soul, we meet some characters with a particular aspect. Their name is Jerry and they introduce as “I’m coming together all of quantized fields of the universe appearing in a form your feeble human brain can comprehend”. In other words, they are dimensional beings and appear as continuous line drawings.

Continuous line drawing is an art technique, which consists in drawing using just a continuous line. It is typical of meditative states, it is based on free creativity and full abandon. Its characteristic is to create a relaxed state of mind.

In the movie, there are some references to meditation with the souls of the Mystics without borders. It a process through which the real dimension is abandoned for the spiritual one.

Therefore, the choice to represent the beings in charge of the “before-world” and the “after-world” in this way is not by chance. The continuous line drawing is a technique based on the full abandon, on the detachment from the reality and on letting our mind free to create.

Soul is a movie for both children and adults. Adults can find in the movie deep meaning and messages. Children can simply enjoy the funny misadventures of 22 and Joe.

Soul is one the movies like Inside Out which discuss deep themes like emotions, introspection and conscience with a light and comprehensible language. These are kind of movies which induce to think about life, about ourselves, about what we are, we want and we are doing.

Moreover, movies like Soul make us think about hope that everyone can find their “spark” in any moment, that is possible coming out from dark moments, from our shell of dark dust, that is possible to reach our dreams and purposes but in the meantime we do not have to forget to live.